5 Netflix Shows to Watch in French in Isolation 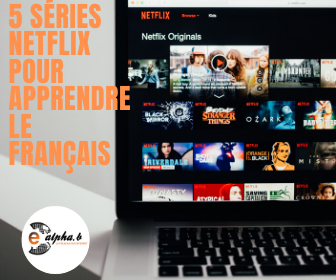 Wondering what to watch right now to improve your French ?

Lots of us around the world are now stuck at home, missing our friends and wondering what to do with all our new-found time.

Watching your favourite shows on Netflix can be a great way to pass the time or connect with friends or family that you are apart from.

With apps like Netflix Party, you can even enjoy a new series with your friends in real time. Another thing you may not have thought of – watching Netflix series can be a relaxed way to continue improving your French without even realising it.

In addition to alpha.b Virtual classroom, watching a French TV show is a great way to improve your knowledge.

You can even strategically pick a show based on which vocabulary you want to learn – whether it be baking or crime.

Netflix has a variety of French language shows available, and there is definitely something for everyone. If the show is dubbed into your native language in your country, you can change the language back to the original French in the Netflix settings.

For maximum French-learning potential, I suggest trying to avoid using the subtitles in your own language, instead using the French ones if you need.

It doesn’t matter if you don’t understand absolutely everything they say, if you’re following the action then you’re already doing well. I have tried to sample the best of each genre, so you don’t have to!

The Hook Up Plan/ Plan Coeur

Synopsis: Elsa is a woman fed up with life; about to turn 30, hung-up on her ex-boyfriend and in a boring job. In an attempt to try and spice up her life and get her confidence back, her friend secretly decides to hire a male escort to take her out on a few dates.

This series is perfect for light watching. It’s a witty romantic comedy, each episode is only 25 minutes long and will guarantee to have you giggling at Elsa’s mishaps. You might relate to some of her embarrassing moments (hopefully not!)

Useful (or not so useful!) French vocab I learned from the first episode: “mater” (to check someone out), “un boulet” (a numpty/liability), “la nidification” (nesting), “bosser” (to work), “crevé” (worn out)

Synopsis: This historical drama begins with the harrowing real story of the fire at Le Bazar de la Charité in Paris in 1897. The story then follows the lives of 3 different women who survived the fire, and its far-reaching aftereffects.

A very well-acted drama lead by strong women, be prepared for emotional turmoil, heart break and cliff hangers that will force you to keep watching and watching. If, like me, you love historical fiction, you will love the reconstructed historical scenery and beautiful costume design.

Useful (or not so useful!) French vocab I learned in the first episode: “une bonne” (a maid), “un goujat” (a boor/lout), “une catalepsie” (a trance)

Synopsis: Set in a futuristic Paris, a company develops a way of determining someone’s perfect soulmate. The brother and sister team begin clinical trials for their product. However, mysterious forces threaten the company’s success…

This show really has a mysterious and ominous feel throughout – which keeps you on edge and wanting more. It has the vibe of a psychological thriller but with a romantic edge. Don’t be surprised if you binge watch the whole thing in one night.

Useful (or not so useful!) French vocab I learned in the first episode: “une doudoune” (a winter jacket), “un essaim” (a swarm), “enfreindre” (transgress, break)

Synopsis: Set in present-day Paris, a famous serial killer nicknamed ‘The Mantis’, now imprisoned, agrees to work with the police after a series of unsolved copycat murders.

Beware, this is not for the faint of heart. Really, really gruesome and (by my standards) very scary. However, it is very compelling and very chilling, if you like the thrill of the macabre.

Useful (or not so useful!) French vocab I learned in the first episode: “une piqûre” (a bite/jab), “la bourre” (late), “un mobile” (a motive), “cambrioler” (to burgle)

Synopsis: 3 (very) amateur bakers come together to complete two ridiculously elaborate baking challenges, which are then judged by real experts and celebrity guest judges. The winner receives a cash prize of 5000 euros.

Expect slightly cringey humour, but this doesn’t really take away from the fact that it is genuinely funny to watch 3 normal people absolutely butcher baking challenges. Very light watching, for a rainy day or if the isolation is getting you down!

Tell us in the comments which TV show you already watched and liked !